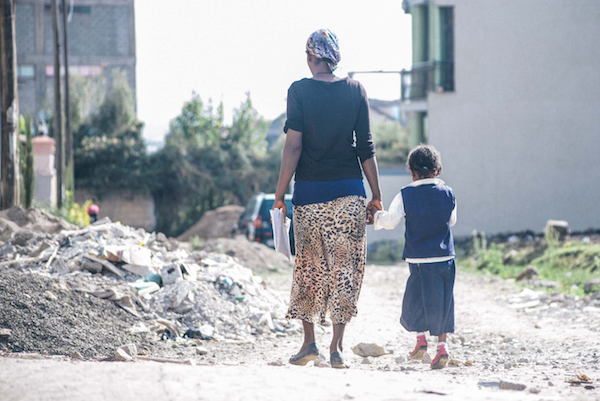 Joy out of Tragedy – Martha and Liya’s story

Martha* was born and grew up in the countryside, where her mother and father passed away when she was very young. Her well intentioned older brother chose to move her from the countryside to Addis Ababa with the plan of caring for her. However, he had little means as a daily laborer and after she came to live with him, he could no longer afford to support nor educate Martha.

When she became a  teenager she found herself in a common situation as her brother made her quit school to instead work as a house worker to support herself, because he could no longer do so. He found Martha a house worker job and she started working and living with that large extended family for two years. Her monthly salary was 200 ETB ($20 back then), but she was required to work the whole day without a break and then worked late into the night, every day.

Her work was hard and demanding and included washing all the clothing of the extended family members by hand, baking and cooking meals for the large household. While working and living in these harsh conditions, tragedy struck when one day the oldest son of the family raped Martha. She now found herself pregnant, violated, overworked, poor and without options.

In the midst of this crisis, Martha visited her aunt who lived a very poor, subsistence kind of life. After Martha explained what had happened, her aunt gave her a place to stay with her, but she could not provide for her.  Even though Martha was pregnant, she needed to work during the day hours as a Daily Laborer and then during the evenings and weekends as a house worker for her Aunt. She did this until she gave birth to her little girl Liya*.

After she gave birth to Liya, life became even tougher for Martha and her aunt as there was no income and no food.  Martha and Liya were malnourished and feeling hopeless when she heard about Embracing Hope Ethiopia.

That was 6 years ago. Over the years, thanks to faithful sponsors and compassionate staff, both Martha and Liya embraced opportunities to change their lives. They received intensive counseling, and care. They also received house rent support, food items, clothing, medical support, hygiene materials and Women’s Empowerment activities. Liya  received Day Care and nutrition in a safe place that meant Martha was free to work and support the family.

In addition when Liya contracted Measles within a couple of days of arriving in our Day Care, EHE Staff intervened. Measles is deadly more often than not when contracted while malnourished.  EHE Staff designed an individualized plan that included caring for Liya at home with extra nutrition to help her to fight off Measles. In the end she is a survivor and not only pulled through, but today is a thriving girl filled with joy.

Today, because of Day Care, and the holistic intervention that goes along with it, Martha has worked her way up from being a daily laborer to become a Builder’s helper. She registered in a government housing program, saved enough money for the down payment, and recently received her house and is working to put the final finishings on it. She hopes to move in soon.

Martha also met a hard-working man whom she recently married. He is a great, loving father to Liya (which is uncommon for a step-dad) and the family could not be happier. Martha recently gave birth to her second child and has freedom to care for him, too. Their monthly income has reached 3500 ETB ($140) and they have outfitted their home with many household items. Martha has become self-supportive and she recently graduated from needing many of Embracing Hope’s services.

Liya recently entered Grade 3 in Embracing Hope’s Elementary School. She continues to be educated by EHE and receives daily food and other supports including spiritual ministry. She is a healthy little girl, full of joy!

A family preserved. A loving Mother together with her beautiful daughter, today living a life of health and dignity. They are beyond delighted. Thank you for making stories like this possible.

* Names have been changed in order to protect the identity of this family.