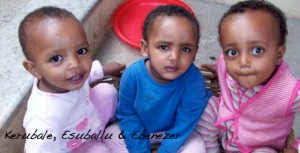 There is something to be said for returning to a place which you now consider home – perhaps a kind of starry eyed, can’t wait to be back home sort of fantasy.   Of course you know in the back of your mind that there is always something waiting for you when you get back home, right?  In our case we had been traveling about 26 hours, including our 8 hour lay over in Jeddah, Saudi Arabia airport.  We hit the ground in Addis and zoomed through immigration, found our bags at baggage and were on our way through security when one of our bags got pulled for further scanning.  The problem was that we were trying to import a microscope into the country – an item which would require clearance from the Federal Health Ministry.  In the end we would find out after a day spent in a government office that microscopes are banned from entering Ethiopia and therefore we will never be permitted to import it 🙂

Our friends met us at the airport as we pushed 4 luggage carts out of the terminal and we were ready to be carried home – it was now 2 am, so we were ready.  We walked all of our bags down the ramps to the parking lot – dumping a number of our bags numerous times – and parked by our friend Levi’s van.  It was at that point that Levi realized he had locked the key in the van – so we had a huddle of foreigners and Ethiopians debating about the easiest way to break in.  In a true comedy of errors, they were able to break in, but Levi’s ignition key was broken in half in the process, but it still started his van and we were off.  At the same time we were loading other bags into our other friend’s van and as we pulled out of the airport he informed us that his headlights were not working – so we made the 30 minute trip to our house with no other light than his 4 way flashers.   We arrived at home and collapsed…grateful for good friends.

Levi and Jessie were so gracious to lend us an extra car they happened to have for a few days so the next day they brought their car to us as we were slowly recovering from jet lag.  This car would prove to be a huge blessing as later that night our guard got violently ill and Jerry had to drive him to the hospital 30 minutes away.  Jerry would spend the night with him at the hospital, sleeping in the lobby after having an altercation with 2 guys at the hospital who were demanding payment for helping our guard.  Welcome home. 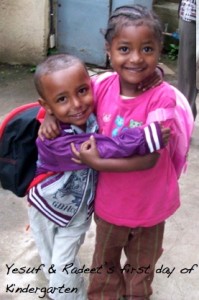 The rest of that week would be spent recovering from jet lag, a trip to Merkato (Africa’s largest market – an experience in and of itself), remembering how to drive in Addis Ababa traffic, fighting in government offices for the release of our microscope and culminated in Jerry spending 2 days in other gov’t offices trying to get our engine imported. We also had the pleasure of reconnecting with friends as well as sweet reunions with children and Moms and staff.  It was beautiful.  Week 1.

Week 2 brought with it 3 full days of trips to government offices – still trying to get the engine here – as well as getting back on track at the office, re-engaging homeschooling, reformatting computers and installing good software rather than the counterfeit stuff we had been subjected to, remembering just how slow the internet is here, & enjoying being back to eating Injera and Shiro Wot on a regular basis.  It’s good to be back.

Here we sit at the beginning of week 3 – our Board has met and we are set to begin the process of expanding the project.  Monday we had to pay our next full year of rent on the house we are living in, so it was off to the bank.  Since, the rent has to be paid in cash, it means carrying a backpack to the bank to receive the stack of money over a foot tall that needed to be carried to the landlord in person.  It’s uneasy carrying that much cash around in a backpack…but it all was delivered and we have our house for another year – we are so grateful.