Miteku and Family Preservation. Exactly why we do what we do.

Preserving Families is the bottom line of what we are about at Embracing Hope.  That means at times the best case scenario comes about where,  after having received support from EHE for a season, now a family is in a different position of providing for themselves.  However, without EHE’s help there is no way this family would ever still be together. 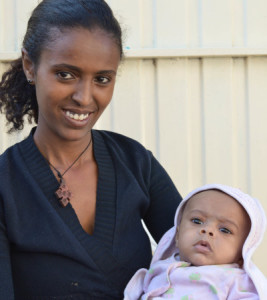 That is the case for Miteku.   We first met Miteku when he was a one week old infant.  His Mother passed away in the hospital after giving birth to him and his father had abandoned the family.  This left his Aunt (his mother’s sister) as the only one who could care for him.   She came to us scared, without resource and without any way of providing what he needed.

Our staff was absolutely amazing in helping this Aunt to get what she needed.  Miteku was too young to admit to the day care, but instead our staff started providing home care until he reached 4 months old.

At 4 months old, he entered the day care center where he received a balanced diet and other supports every day.  As a result everything changed for him and today he is a  healthy and happy child.

Recently his Grandmother arrived from Gonder.  She wants to care for him there and she has the means to do so.  She misses her daughter who passed away so much – and she sees hope in being able to care for her grandchild, Miteku.

Miteku’s Aunt said that God used EHE to rescue Miteku’s life. If he had not received support, he would not have survived.  For this reason, both Miteku’s aunt and the grandmother are so grateful to EHE’s staff.

Family Preservation is what we do.  Because of your partnership we were in a position to care for a child who was orphaned shortly after birth, but who had family members willing to care for him.  They simply needed someone to walk the road for a distance alongside of them.   Without intervention, he never would have made it.  But with simple intervention – this family is together and thriving.

Thank you for changing the lives of families like Miteku and so many others.