A New Day. A New Family That Needs Sponsored. 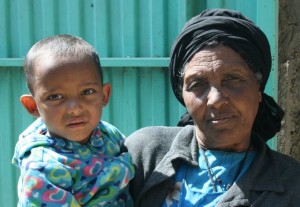 Today I would like to introduce you to Hibrey and the 3 year old twins that she is guardian for, named Tarikwa and Tameru.

Hibrey is grandmother to the twins, but she is the one who has full custody of them.  Hibrey is 50 years old and in many respects is considered an older woman within this culture.  She is reaching the age where many people see retirement just a couple of years off and a time to have one’s children help to care for them. However, in HIbrey’s case the roles have been reversed  and now she is caring for her grandchildren. 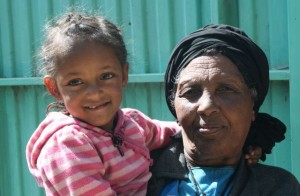 Hibrey is poor and illiterate.  She has relied on begging with the twins to try to make enough money on a monthly basis to help pay the bills that the 7 people living in a very small room share between them.  Now, the children are no longer sitting all day without any interaction, begging along the roadside AND Hibrey is free to work and see dignity restored.

Tarikwa and Tameru’s mom had good intentions when she left them in the care of Hibrey a while back.  Her plan, like so many young women living in poverty, was to move to an Arab country where she would find work as a household servant.  The promise was that once she arrived there she would be making much more money than she could ever hope to make here and then she could start sending the money back to care for her children and her mother.   However, their mom has now disappeared.  Three months after she arrived in the other country they heard from her, but they have not heard anything since and her whereabouts are unknown.

Hibrey is a courageous woman.  It would be easy to simply show up somewhere and ask others to take the children.  However, she is doing all she can to keep these children in her family and to see a different life for them in the future.

This is where you come in.  Would you partner with Hibrey in the care of these twins?  By partnering with us and with Hibrey, you help us to provide her with the support she needs while also providing an opportunity for the cycle of poverty to be broken for Tarikwa and Tameru.  They will get food and health care and clothing and education – all things that Hibrey has longed for them to have, but has not had the capacity to do so.

Hibrey will also have someone walking with her, letting her know that there is reason for hope while also watching her grandchildren thrive.  Thank you for stepping in to partner with this courageous Grandmother.