Easy Fix? Not Quite.

For quite some time we have been trying to increase our water storage capacity at the Day Care since we have some weeks where we only have water for 2 days, making it difficult to do all of the laundry we produce on a daily basis.  We need to store water when it is on.

So, its an easy fix, right?  All we needed was an extra storage tank.

But, like so many things here…it sometimes takes a bit of extra effort to get the job done.

We had the money to buy the heavy duty tank – a $500 investment for a 2,000 liter tank that would double the capacity of water that we can store. 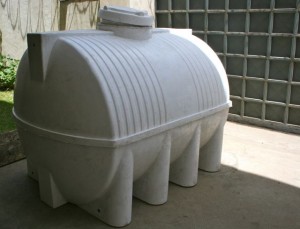 So, we ordered the tank and we waited.  I called our salesperson 2 times per week and was told that it would be ready for delivery in a day or two.  Then more than a month into the waiting he got honest with me.  He told me that a machine had broken down at the factory and it would be just one more week of waiting.   Yeah, right.

When I had finally given up hope, he called to say, “It’s ready and I can have it delivered tomorrow.”

It came on Thursday, but to my surprise the dimensions were different than I had anticipated and we had a new problem.

Since the house takes up most of the compound area, there are only very tight walk ways on both sides of the house….thus no room to get to the back.  And, we have a house whose wall borders us on the back of the property, so it can’t come that way.

That left us with one solution – OVER the house. 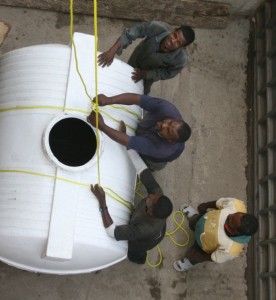 So, Saturday morning 7 of us tied ropes on to the tank and hoisted. 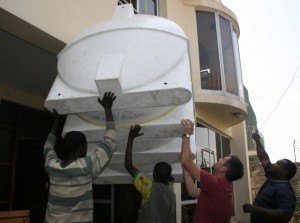 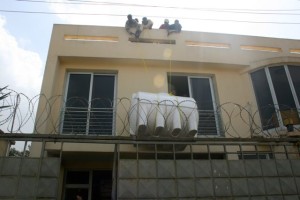 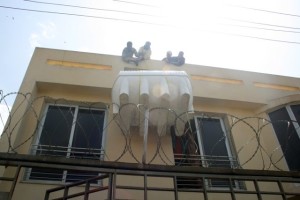 And Down The Other Side… 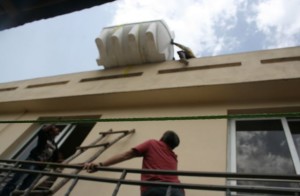 Down has to be easier than up, right?

The only really trying point was when the tanker was stuck on the roof of the house behind us…Bummer. 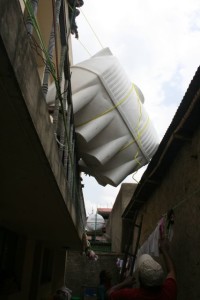 With a little bit of coaxing… 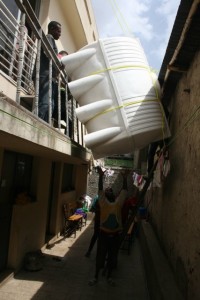 And we were there. 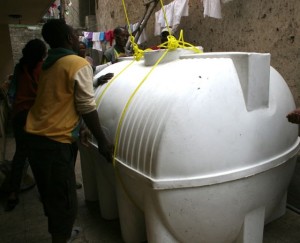 Now, the easy part…it will be hooked up next week and we’ll have doubled our water capacity.   Grateful for donors, hard workers, a little bit of ingenuity and a whole truckload of perseverance!  Clean Diapers, here we come!