What A Ride for Selemon!

I remember clearly the day just over a year ago right before the day care was going to open.  The director (Alayu) and the social worker (Sisay) and Jerry had started screening moms.  And Alayu came to me and said, “There is a mom.  We enrolled her daughter, but she has a son too.  I’m not sure we can take him.  He can’t even sit up.  What do you think?”  I asked if I could meet him.  And clear as day, I can see us standing outside our gate as I was introduced to Yeshi (the mom).  There was a little person covered in scarves that were used to strap him to her back.  And as I lifted the scarf to see this boy (honestly, with a bit of fear for what I was getting us into), I was met with one of the most joy-filled smiles and the brightest eyes I had ever seen.  Selemon.  We talked for a few minutes, and immediately registered him for the project.  And we haven’t regretted it since… 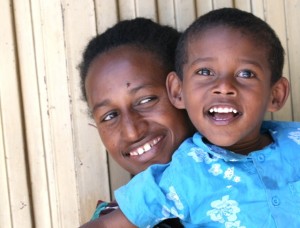 You may remember hearing us talk about Selemon, the bright and cheery, always smiling 6 year old boy who has Cerebral Palsy in the project.  He is a guy who brightens up the center every day, as does his filled-with-joy mom, Yeshi and his younger sister, Yeabsera.

The one regret I’ve had is that we haven’t found better resources for Selemon.  In a country where people with disabilities are often overlooked, seen as “less than”, services can be hard to come by to help kids like Selemon develop to their full potential.  With the nutrition and health care he was getting at the day care, we saw changes in Selemon, but had no idea what he was truly capable of or how to help him reach that.

But God saw.  God knew.  And man, did He ever provide!  One day, out of the blue, the flood gates opened for Selemon. 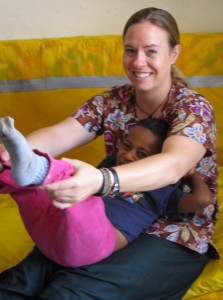 It started on March 10 when a few people came to stay with us.  One of them was a woman named Audra.  It turned out that Audra is a physical therapist.  And it turned out that Audra and Selemon fell in love with each other (oh, you should have seen him light up when she walked into the room, and her beautiful smile response to him!).  She worked with him, stretched him, moved him, loved him – all while he gazed starry-eyed into her eyes.  And we saw a tiny bit of Selemon’s potential.  Audra also worked with our nurse and Yeshi to show them how to continue working with Selemon after she left.  Score!

While Audra was here, Yeshi asked the staff if there was any way we could get a wheel chair for Selemon.  He was about to turn 6, and for Yeshi – who barely reaches up to my chin – carrying him on her back with a scarf was getting to be too much.  We said we’d see what we could do.  We talked to Audra, and she said, “Between the roads here and his condition, you almost need something like a jogging stroller.”  We tucked it away in our minds.

On March 22, I received an email from a woman named Colleen who had spent a week with us back in December.  She had been thinking about Selemon, and proceeded to write a lot of very good and thought-through question about the possibility of her researching getting a wheel chair for Selemon.  God’s funny, huh?  But wait, it gets better.

Colleen did all the research and sent me 2 options for chairs for Selemon that she thought might work.  Guess what they both were –  jogging strollers adapted for kids with CP!  We talked with Audra via email, and were able to choose what we all felt would be a good option for Selemon.  On April 4, I got an email that started, “So, if you would like me to go ahead, raise the money, and order this, I would be happy to begin the process.”  Holy cow.  Yes!!!

So, my mind started working on how we would get the chair here.  And then I got another email from Collen – could she and her daughter Lia and her friend Laurie (who is an occupational therapist and has worked with kids with CP) bring the stroller to us?  Another resounding YES!

Then God got ridiculously funny.  I got this email from Collen:

About five weeks ago, we had a crazy event happen. An eighty-five year old man had an accident in our front yard that he walked away from physically unscathed. The entire event would be difficult to dream up (he crossed 5 lanes of traffic, went through two sections of our across-the-street neighbors’ fence, through our front yard, over our driveway and into a stand of trees). We had a small amount of property damage that we were not going to submit a claim on, as the area was going to be modified some time soon anyway.

However, turns out the insurance company automatically sends an adjuster, followed by a check. Crazy.

The stroller for Solomon is originally $897, on sale for $499. The check we received as the settlement last Friday was for $511.62 Wow. We would only have to pay a small amount of tax. What a blessing to see God move this way!

But the story wasn’t over. 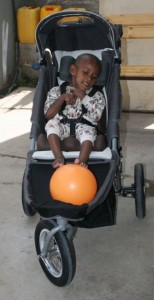 On May 26, Colleen, Lia and Laurie arrived at our house with the chair.  Armed with duct tape, loads of Velcro, and creativity that blew me away, Laurie and Colleen were able to fit Selemon into his chair beautifully.  And, boy, was he tickled!

Typical boy – he was most interested in checking out the wheels and seeing how that thing could go!

Laurie unlocked a lot of Selemon’s communication for us, gave us practical ways to move forward with 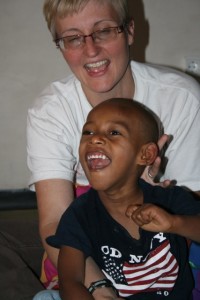 him at the Day Care, and gave us ideas for some more equipment that could be made locally to help him progress.  Amazing.

When Selemon joined the day care, he could barely lift his head up when laying on his stomach.  Over the past 3 months, we have seen changes.  Even my kids have noticed: “Mom, is Selemon holding his head up higher?  Did you see – his fingers are able to open up to grab something?”

But imagine my shock and sheer delight when Laurie let go of Selemon’s legs on the mat and he took off ROLLING!  First one way, and then the other!  Over and over and over again, beaming the entire time!  Such huge steps for this little boy!

And it’s just the beginning.  Selemon is now set to work on his next developmental milestone – sitting up.  It will take some time and work, but we’ve now got plans in place to help him achieve that.  Please keep praying for Selemon – for his health, for strength, for further development – for his healing, but most of all that the joy of the Lord continues to bubble out of him. 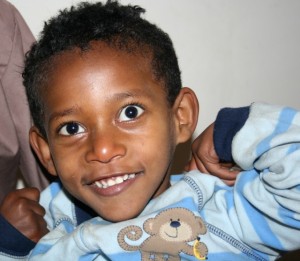 Phew!!!  What a 3-month stint for Selemon!  What a ride!  What. a. God.  I mean, seriously, I couldn’t have orchestrated all that if I tried.  Just writing about it makes my head spin.  Isn’t God amazing?  Down to the tiniest detail for one little guy living in a slum on the edge of the capital city of an African country.  What amazing provision.  What extravagant love.  But that’s our God for you.  So grateful to be allowed to witness a tiny piece of what God has in store for Selemon.

← From one cranky, grumpy, restless, cynical, indecisive Jesus follower to another.
A Fatherly Difference →

3 Comments on “What A Ride for Selemon!”