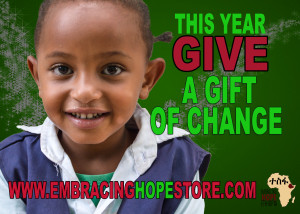 Helping Families one step at a time.

I love when children lead the way in making a difference in the lives of families in need.   Recently, 10 Year old Amanda felt compelled to do something to help families who are hit by drought and famine in Ethiopia.   Her actions leave me wanting to do something!  Here are the words of her Mom, Stephanie…

“Amanda and her friends raised $177 at a craft show today for the famine that has hit Ethiopia in a devastating way. Amanda met the Shannon family who run Embracing Hope Ethiopia.

They are originally from Lancaster and moved to Ethiopia to work on behalf of the extreme poor and prevent children from becoming orphans. The Shannons stayed at our house 2 summers ago for a few days and she got to know their one daughter who is her age pretty well. They recently told us about mothers and children being driven from their villages due to a sudden famine that has killed their crops and cattle. They told us that unless they intervene many of the children coming to them in desperation won’t make it.

It might not seem like a lot but $177 will go along way in Ethiopia considering a lot of families live off $1 per day. Amanda only had breakfast and a few snacks at the craft show, so when she came home around 3:30 she was starving. After eating a big bowl of spaghetti she commented “That tasted so good! Imagine how the food will taste to the people we raised money for today”. Absolutely Priceless!”

You can make a difference this Christmas season, too.  Check out our Gifts for a Cause at www.EmbracingHopeStore.com and give a gift that keeps on giving!